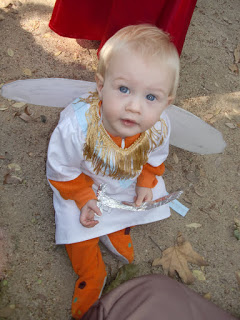 This is an excerpt of a letter from a wonderful little boy named Frankie, graciously transcribed by his Mom at Catholic All Year to the Lady who yelled at his Mom  at Church.

I love how eloquent this letter is and how Frankie clearly rises above uncharitable reactions. He has clearly grasped the lessons of St Therese, converting experiences with cranky people to opportunities for growing in virtue.

Please check out An Open Letter to the Church Lady Who Yelled at My Mom for the full letter in its wisdom-filled entirety!

…you took that opportunity to tell my mom a lot of stuff including that she is “a big distraction in Mass” and “everyone thinks so”. Ouch.

Now, my mom and I both know you are wrong. I’ve been coming to this Mass with my mom since before I was born. These people are crazy about me. “EVERYONE” seems to me to really like seeing young families at Mass.

…Well, here’s what I have to say about that: Who says you get to have peace and serenity at Mass?  Either of you?  You can be hair shirts for each other.  And maybe it will make you both better people.

All right Church Lady, that’s all for now.  Those block towers aren’t going to smash themselves.  But I’ll see you tomorrow morning.  And pretending you don’t see me just makes me try harder to get your attention.  love Frankie

The truth is, Frankie sounds a lot like my little guy Adam.  Adam likes to be busy and he has been known to bang things around and shriek a little at Mass.  OK, a lot.  Frankie’s Mom and I have decided to let Frankie and Adam be pen-pals and explore the world of Mass, cranky people, Catholic traditions, being the youngest of 5 or 6 kids and how they are doing on their daunting task of training their Moms, Dads and siblings in their Catholic vocations. 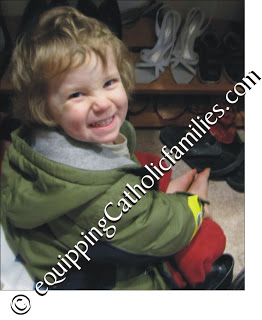 I know just what you mean. My mom gets uptight about cranky old people who glare at her just because I like to stay busy at Mass. Sometimes I want to sort the hymn books or just flip through them, pretending I can read music. Sometimes the kneeler isn’t down and someone has their foot on it and it makes it hard to have it ready for kneeling time. Sometimes I just want to make a dash for the aisle and see how many pews I can cross before someone grabs me.

Sometimes old people are cranky and have lots of advice they’d probably like to tell my mom….but sometimes they’re just praying and their eyes tend to follow a moving target…and that’s me! Sometimes, people forget to smile…so they look cranky, but they’re just praying or thinking.

My mom used to worry about this gentleman who always sat in the pew behind us at Church; he always seemed to be watching us. He didn’t smile too much, so mom thought that we were probably disturbing him. We found out later that he sits behind us on purpose because the five of us kids remind him of his own five children and he likes being near us. Imagine that!

Hey, Frankie, have you figured out why it’s ok for the altar boy to ring bells during Mass, but we’re supposed to sit still and only whisper? I’d really like to get me some of those bells!

I’m going to explore my brother’s room now….he’s got some cool Lego and he doesn’t think I can reach it up on his shelf. 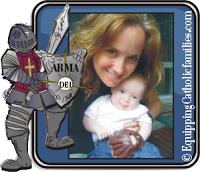 Adam’s Mom is a wife, Mom of 5+ kids, a designer, an architecture school survivor, an author and a crafter who thinks it’s cool to be Catholic! Check out the Arma Dei Shoppe for solid Catholic, fun teaching tools and gifts to celebrate and teach the Catholic Faith and subscribe to Equipping Catholic Families for family-building and Faith-centred crafts!