Everyone was gathered around Jesus as He began to speak, asking “Who do people say that the Son of Man is?”  Many of the others spoke up, calling out various titles and names…John the Baptist, Elijah, Jeremiah, a prophet.  All fell silent as Peter spoke out.  He said “You are the Messiah, the Son of the Living God”. Jesus seemed pleased by Peter’s response.
Jesus looked thoughtful and then proceeded along the bumpy path, at the foot of Mount Hermon.
The others followed, in clusters of 2 or 3 and continued to talk about who the crowds thought Jesus was. 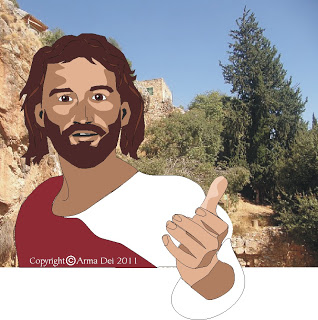 I notice that Jesus is walking alone
and I run up to walk in step with Him.
He stops and turns to me.

He calls me by name

and He says “Who do YOU
say I am?”
Looking deep into His Eyes, it seems like the world stops to listen
and I answer Him… 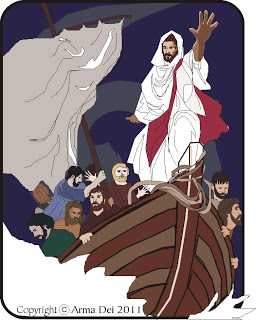 I am one of the Apostles, with Jesus in the boat, crossing the Sea of Galilee.  I have made this trip many times before and it has always been fairly uneventful.  Jesus is a little tired from talking to the crowds all day and He settles into the stern of the boat to have a little nap.
Suddenly the sky gets dark and the winds and the waves begin to toss the boat.  Many of the other Apostles are experienced fishermen, but even they spring into action and worry that the little boat will be overturned.
Panic sets in and we can’t believe how soundly Jesus is still sleeping in the boat.
Some of the others are trying to control the sails while others are trying to empty the boat of water, but it keeps pouring in with the rough waves.

I know that Jesus could somehow fix everything just with the command of His Voice.  I rush to Him, grab His shoulder and call His Name.
He awakes a little startled.
In an instant, Jesus has commanded the winds to stop and the waves to subside.
All is calm now, but Jesus looks at me, looking a little hurt.

With His Eyes locked on mine,
He calls me by name.
where is your Faith?
Why are you afraid?”