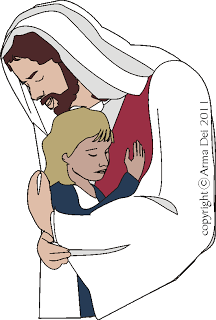 I remember…I was about five years old.
My family had heard that Jesus was walking through our town,
so we dropped everything to see Him and to hear Him talk.

With every step He took, the crowds surrounded Him, pressing in on Him to hear His every Word.
He had a gentle, but strong voice.  He told stories and I was captivated by every word that He spoke.
At one point, He sat down on a big rock and the crowds gradually settled, sitting on the ground around Him.  My neighbors were there…entire families.  Some of them were pushing their kids in Jesus’ Direction, hoping that He would bless them.
Jesus’ Followers looked nervous as a few kids approached Him.

I stood about five feet away, wanting to get closer to Jesus too, but nervous that the Apostles would scold me too and push me back to my parents.

All of a sudden, there was a clear path from me to Jesus.
Jesus told His followers “Let the children come!”
and He held out his arms and He looked at me!
He called me by name ~ which surprised me ~ and He motioned with His Hand for me to approach Him.
When the distance closed between us to about a foot or two,
He reached out and pulled me to Him.
I was completely enveloped in His Arms.
His Robe covered my shabby clothes and my cheek rested on His Chest.
He told me…

4 thoughts on “Let the children come to Me…”