I was speaking with my spiritual director and confessor.  Almost as an afterthought, I told him that sometimes I didn’t feel forgiven, even after confession.  He explained that it was possible to be overscrupulous…but he also mentioned the lifelong confession.

I knew instantly that I was being called to do this…and it was terrifying. 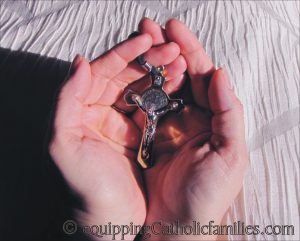 I spent the next 2 months preparing for a lifelong confession…not because anyone should necessarily take two months to prepare, but because the only confessor I could imagine asking…was the one who had suggested it…and he lived 4 hours away.  We booked my lifelong confession for a retreat that he would be chaplain at.
I prayed.  I reflected.  I asked the Lord to show me what I needed to confess…and boy, did He.
I remembered things from a long time ago…and other things that I had probably already confessed…loosely, vaguely, conveniently omitting frequency or severity.
I wrote everything down, especially if I wasn’t sure if I had confessed properly before.

I remember crossing the threshold into the room where I was to have my lifelong confession.

As I stepped through the doorway, I looked down at my shoes and I was thinking “I can still turn around and run!”.  It was kind of how I felt every time I walked into the hospital to have a baby…a little anxious and fearful; only then…running away wasn’t an option.
It wasn’t easy…in fact it was one of the hardest things I have ever done…to speak, out loud, a bunch of things that I was ashamed of.  I had never been so deliberate or specific or thorough …during confession.
I can still feel how incredibly, awesomely relieved I felt after that confession.  I understood the Mercy of God and the power of confession monumentally, unbelievably, giant-steps bigger in the absolution of that confession, than I had ever felt or understood before.  It really took.
Things that I had felt mortifyingly embarrassed and ashamed about, have been released from my guilt. I know it’s the Mercy of God, and Jesus’ humongous Suffering and Death on the cross that gives us the incredible gift of confession and ability to erase our sin…but there is no doubt in my mind that I paid the little tiny price…as big as I could offer by humbling myself in front of a priest, a friend who I love and respect so much.  This was no anonymous confession.
I think being prepared and having true contrition are conditions for confession (I’ve been trying to look up the exact wording, but I can’t find it).  I don’t think I could have been more prepared or more (mortifyingly!) sorry.  No detachment, but full accountability …and in return I received Jesus’ Love and Mercy… just for me.
My confession was one of the most powerful experiences of God’s Love that I’ve ever had.
It almost made my heart stop to do it, but I wouldn’t have changed a thing.
And that list I wrote of my past sins?  I destroyed it. I would have set it on fire if it wouldn’t have set the sprinklers off at the hotel where the retreat was.
My spiritual director / confessor and good friend once signed a card to me with these words.
Remember that you are unconditionally loved by God and sustained at every moment by His Grace.
Pray about it.  Are you being called to do a life-long confession?
Talk to a priest and book an appointment.  You should probably give him the heads-up that this would be a life-long confession.  This is not a 5-minutes-before-Mass-starts-and-there-are-people-waiting-in-line-behind-you kind of confession.
Spend time in prayer, in preparation for this special confession.
Ask the Lord to help you remember everything that you need to confess.
Write it down…but you might want to keep that list hidden or use some serious code.
Be open to God’s Grace, His Infinite Mercy and His Unconditional Love for you.
Remember that you are unconditionally loved by God …and sustained at every moment by His Grace…
…no matter what you have to confess to Jesus, through a priest.
Priests are AWESOME and compassionate and have the power through Jesus to free you from whatever you need to be freed from.
Go to confession.  Have a blessed Lent!
If you have read all the way to the end of this post or if you have been affected by this post, please leave a comment.  Just checking if anyone is reading this. =)

12 thoughts on “do you need a Lifelong Confession?”